Like a lot of people, I’m outraged by the light sentence—essentially a slap on the hand and a shake of the finger—given to the Stanford student and swim team star who was convicted of three counts of sexual assault for raping an unconscious woman behind a dumpster, who received six months jail time plus probation from a judge who said a longer sentence would have a “severe impact on him.” Half a century ago, we might have expected this incident to be shrugged off as “boys will be boys.” The rape would have been just as wrong half a century ago, but more concern for the rapist’s welfare than the victim’s would have been normal fifty years ago. How sad it is that in the Twenty-first Century we’re still blaming victims for not being pure and demure and well behaved enough. This same attitude in other countries leads to the sisters of rapists being raped in kind, as “justice” for the original crime.

What do I think should have happened to the rapist in this case? The maximum sentence under the law. The rapist’s status as a swim star at an expensive private university shouldn’t have carried any weight in this case. A privileged upbringing should not entitle one to commit crimes, period.

Sexual abuse and its lasting effects are a major theme of my upcoming scifi/fantasy novel A Wizard’s Forge, in which Vic, the protagonist, is held captive by the sadistic Lord of Relm, Lornk. She escapes and  joins the Lathan army in a war against Lornk’s forces, but is captured again during her first battle. This time, she escapes with the help of another Lathan soldier named Maynon, and they discover Vic isn’t the only young woman caught in Lornk’s dragnet… 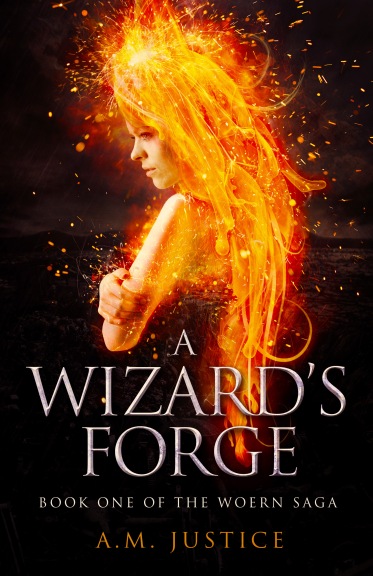 They broke out of the hollow, running across a flat expanse of grass at the bottom of the hill. Maynon puffed beside her, his strides limping, then grabbed Vic’s arm and tugged her down. The beam from a hooded lantern swung over them. Maynon grimaced, his face almost black in the darkness, his blood an ugly shadow. “My knees are sore,” he grumbled.

“We’ll never make it back to the Lathan lines tonight,” Vic whispered.

Suppressing a growl, she looked toward the Relman fires. At how many campsites did other girls lay bound, ready to be taken to Lordhome and Traine. “Look,” she said suddenly, her voice assuming the authority of a Logkeeper. “All this business capturing young girls is because of me—”

“What?” Maynon scoffed. “The Relmlord have a personal vendetta against you?”

“You can do what you want tonight,” she went on, “but I’m going to try to rescue other prisoners. The Relmlord will sell them in Traine, and I wouldn’t wish that on my worst enemy.” Not even Kara.

Maynon lay speechless. He looked at the fires, at the stars, his mouth grim. “Madness,” he muttered. “Crazy insanity.” Then he eyed her. “Wish I’d looked the other way when I saw those two hauling your ass off the field. But since I can’t sit by a fire with my pipe, I might as well help you.”

Vic smiled, but a lump blocked her throat. Swallowing hard, she pointed across the grass. “If we head for that gully—”

She blinked at him. “The one on the map. We’re about a league south of the battlefield—there was this string of hills like a necklace, then this flat area—”

“You memorized all that?”

Shouts echoed across the grass, lamps bouncing among running figures. “We need weapons, Maynon. Can we ambush them in the gully—is that a good plan?”

They sprinted, diving and lying still whenever a beam rippled their way. Reaching an embankment, they leapt down, splashed into water, then ran downstream, hoping the burbling creek would wash footprints away. In a stand of trees, Vic hid behind a curtain of exposed roots while Maynon grabbed a heavy stone from the creek bed and swung himself into some overhanging branches. They waited, hoping their pursuers would split into small groups when they reached the stream. Orders echoed toward them. Minutes later, a pair of troopers ran along the rim of the gully, a third splashing through the stream, lamps flashing on the water. Vic pressed herself deeper into the shadows, her breath still in her throat. As the man in the creek passed beneath his tree, Maynon dropped on top of him, knocking him facedown in the water, and slammed his rock into the man’s skull.

The other Relmans leapt at Maynon, and Vic sprang from her hiding spot and stabbed one in the back, the razor sharp stone sliding easily through the woman’s ribs. Maynon sparred with the other, water flying around them in black droplets. The woman fell, coughing blood into the stream; Vic swiped the bow off her back, yanked her quiver free, and climbed the embankment. Arrow nocked, she took aim, but Maynon already had the third trooper down.

Stripping the Relman weapons, they doused the lamps and sprinted toward the center of the Relman line. In a copse, they paused to catch their breath. Vic’s ears pricked, and she held her breath, signaling Maynon to quiet his own gasps. Jeering laughter filtered through the leaves, voices egging each other on. Muffled whimpers and choked screams punctuated the glee. Vic knew that suffering; even if Kara had submitted to Lornk, Vic never had in that room in Traine. Ears burning, she hissed, “I thought Relmans were supposed to be just as prudish as Lathans.”

Maynon’s spittle thwacked against a fallen trunk. “Rape’s a killing offense, but folk still do it.”

Stealing toward the noises, they stopped outside a circle of firelight. A Relman man and woman lounged near the coals, giggling while a third, trousers pushed to his knees, pressed himself into a dusky woman, gagged and stripped, each hand bound to an ankle.

“Think of it as training, honey,” the woman taunted.

Cold rippled from the roots of Vic’s hair, encasing her heart in ice. Her fingers tightened around the hilt of the stoneknife, then loosened, sure of their grip. The shadow of Lornk’s hand encircled her throat, and her nostrils flared at the rutty stench pervading the campsite. Never, she promised herself. Never his. Striding into the circle of light, she jabbed the stoneknife through the ear of the woman, leapt over the fire and rammed the blade through the eye of the man, then straddled the rapist, pressing the knife edge against his throat.

“Pull out—gently,” she whispered. He complied, eyes rolling between her and his dead companions. “Maynon, I want him bound like her.”

Maynon’s eyes were just as big as the rapist’s, but he stepped over to the captured woman. “You’ll need some twine.” Cutting her loose, he pulled off his tunic and gave it to her, then tied the Relman hand to foot while Vic kept the knife at his throat.

Once he was bound, Vic went to the Lathan woman. “What’s your name?”

Shivering, she huddled within Maynon’s tunic. Her eyes darted between Vic, Maynon, and the Relman, then she pressed her lips together and answered. “Silla of Pilagg. I was with the Thirty-second. Can I kill him?”

Vic shook her head. “I need him to give a message to the Relmlord.” Facing the Relman, she said, “You caught the wrong girl. But if you had got the right one, do you have any idea what he would have done to you?”

The man’s eyes flicked to Silla, then to his shriveled privates.

“He might have started there.” Vic smirked, tapping the blade against her palm. Ice still enveloped her heart, but she felt a heat in her loins she hadn’t felt since those last moments in Traine. “In fact, he might still. Maynon, hold him down.”

Silla strode over and pushed the Relman into the dirt. She pressed her palms into his shoulders, Maynon’s tunic falling over his face. “Enjoy the view, asshole,” she grated, giving Vic a grim nod.

Maynon grabbed the man’s legs, and Vic sliced open his shirt, handing Silla a swath of fabric to force between his teeth. “I hope they find you in time,” she said as she cut. Shrieks muffled, the man jolted and bucked, but her comrades held him. “I almost wish I could be there, when the Relmlord sees this. I hope you’re still alive, so he can tell you what your punishment would have been, had it been me you found. Knowing him, he probably won’t tell you—he’ll show you.”

“You’re the one they wanted?” Silla asked over the man’s gagged scream.

Vic pointed to the name carved into the man’s bloody chest. “That’s what he called me.”

Vic shrugged, then read aloud the message she’d cut into the man’s skin. “I raped a girl I thought was Kara.” Standing, she touched her tongue to the blade, relished the iron. “I really hope you’re still alive when your comrades find you. If you are, when you see Lornk Korng, tell him Victoria of Ourtown will never be his. She’s a Lathan now.”