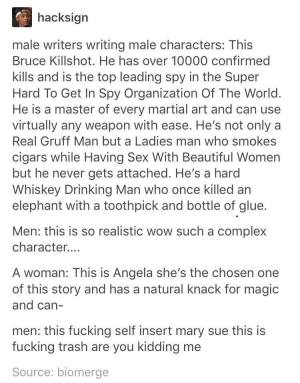 Author C.T. Phipps recently posted this meme in a couple of Facebook groups, and as memes like this do, it inspired some rousing debates. Almost everyone agreed that “Angela” was really a stand-in for Rey, the female protagonist of the final Star Wars trilogy, and Bruce Killshot is…well, nobody really talked about Bruce, other than to note that surely Bruce had a lot of training, and that was why Bruce (i.e., James Bond, Jason Bourne, 90% of Tom Cruise’s characters, et al) was clearly not a Mary Sue (or Gary Stu), whereas Angela (Rey) certainly was. I believe Rey is not a Mary Sue, and my views were articulated really well by Erik Kain in a Forbes article that was written shortly after the release of The Force Awakens. But the debate got me thinking about Vic, the protagonist of the Woern Saga. The question, is Vic a Mary Sue, has plagued me for some time now, especially because between me and you, Dear Reader, she sorta meets the criteria:

Dang, that’s a heck of a list. Perhaps I should quit writing now.

But, wait. What, really, is wrong with a Mary Sue?

The term itself derived from the main character in a fanfic spoof published in Menagerie 2, a Star Trek fanzine, which poked fun at the sort of stunningly beautiful, sexually irresistible, Jane of all trades, mistress of the universe teenage protagonists who were featured in many of the fanfic stories the fanzine published. A Mary Sue protagonist is, first and foremost, a sign of Bad Writing. A true Mary Sue requires no real character development, and in the plots constructed around her (or him), everything goes her (his) way except perhaps for a tragic, untimely, and selfless death, in which case all the other characters mourn her deeply.

Growing up, however, when I think of almost any hero or heroine of any of the stories I liked, they almost always were extraordinary in some way and drew upon previously unknown talents or abilities to survive and triumph. Rand al’Thor has no clue he’s an Aes Sedai yet manages to use the One Power multiple times to defeat enemies before he meets someone able to train him. Rand also defeats a blademaster in single combat before he’s had very much real training in swordplay. Frodo survives several attacks by Ring Wraiths and manages to elude them and escape to Rivendell on his own (in the book) despite being grievously wounded by a Nazgul blade. Lessa is singularly clever, instinctively bonds with a gold dragon, and singlehandedly figures out how to go 400 years into the past and fetch the missing Weirfolk back to her own time.

Extraordinary abilities, courage, and leadership in the face of certain doom are hallmarks of fantasy, as well as elements of the type of story I like to read and write. I’m also an eminently practical person and a realist, so within those fantasy tropes, I make my characters real. So, is Vic a Mary Sue? Here are my arguments why she is not.

Speaking of Book 2, I better get back to writing it.

3 thoughts on “What’s the Matter with Mary Sue?”