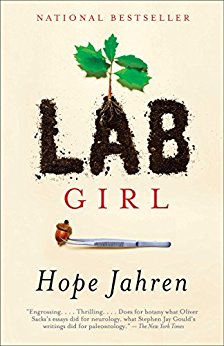 It’s been a while since I’ve posted a transcript of my booth activities at last fall’s Virtual Fantasy Con, but yesterday I was inspired to post my discussion with Sarah Lockwood when I bought a book entitled Lab Girl by Hope Jahren. Lab Girl is a memoir detailing a botanist’s childhood and life as a young woman earning her PhD and working her way up the ranks of academia. The title and jacket copy immediately made me think of Sarah, aka the Critiquing Chemist. As Sarah describes herself:

Sarah Lockwood is an analytical chemist by training, and her blog The Critiquing Chemist is a merging of her love for books and a deep-seeded need to over analyze everything she happens to come in contact with! Her reviews, ranging from nonfiction to fantasy, consist of concise overviews of the book, followed by spoiler-laden additional insight section where she discusses concepts that caught her attention. Sarah’s research during graduate school involved creating a 3D printed diffusion based dynamic in vitro pharmacokinetic device. As one of the earliest chemistry groups to incorporate 3D printing into a research setting, she saw firsthand the future potential of this innovative technology from novel platforms to custom labware.

In addition to books, Sarah highlights her travels, bookstore visits, and hobbies including beekeeping and crafting on her blog. Sarah is witty and wise, and has an astounding amount of energy and brain power, and posts some spectacular photography on her site. To express my admiration for this particular ‘lab girl,’ I had to share our discussion.

AMJ:‪ So which comes first, chemistry or literature in your love of things?

SL:‪ I would have to say literature. I’ve always had a deep love of reading. However chemistry comes a close second.

AMJ: This is something we have in common. Growing up, I couldn’t decide whether I wanted to be an actress or a marine biologist. I split the difference with writing.

SL: Growing up marine biologist was also a phase I went through too!

AMJ: Some girls like horses, others want to be marine biologists. What drove you to pursue a career as a chemist?

SL: My mom is a high school science teacher. As such growing up everything was turned into a lesson. An example I love giving are the woods walks we would go on as kids where we would discuss the types of trees or how the mushrooms growing on trees survive. I think those lessons translated to the classes I enjoyed the most when I was in college.

AMJ: Did those walks inspire the beekeeper in you too?

SL: Actually the beekeeping comes from my husband. His grandfather kept bees until he was in his late 80s, and many of his childhood memories through adulthood involve helping his grandpa with beekeeping. When a wild colony made one of the abandoned hives its home a few years ago, we took it as a sign it was time to start a hobby we’d talked about getting into for years.

AMJ: Have you had any trouble with colony collapse syndrome?

SL: Unfortunately we have. All three hives that we have had over the past two years didn’t make it through their first winters. We struggle trying to determine if it was a rookie beekeeper mistake or a due to colony collapse syndrome. We have three new hives this year plus a beautiful wild hive that we found by my parent’s farm. Fingers crossed this winter is kinder to our bees!

AMJ: I hope so too. Do the bees normally hibernate, or do they just stay in the hive eating down their honey stores? (My first editorial job was working as a production editor for an entomology journal, so I’m genuinely interested.)

SL: Good question! Throughout the cold months they stay in their hive. It is actually really fascinating but they are able to keep their hive surprisingly warm even in the cold Michigan winters! This article does a great job explaining in a bit more detail what happens to bees during the winter. They really are remarkable little creatures. https://honeybeesuite.com/physics-for-beekeepers…/ 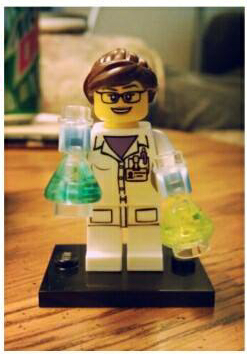 AMJ: That’s super cool. I hope they are all still there come spring. Let’s talk about what else you’re doing. Is the Lego chemist something you cooked up in your 3D printer?

SL: While our printer is top of the line, unfortunately it doesn’t have that range of colors! A few years ago Lego came out with a collection of characters in different careers. After buying the awesome female scientist, my coworkers and I decided to recreate the her in our lab using blue food coloring and fluorescein. When I was starting my blog I thought back to the photo and through it would be a good persona for my About Me page.

AMJ: And what inspired you to start the blog?

SL: I had just finished a really crazy time in my life where I had written and defended my PhD and planned my wedding all within an 8-month time frame and had so much extra time on my hands that I didn’t know what to do with myself. During grad school my reading for fun had fallen to the wayside, so I picked it back up with a vengeance. Many times my coworkers and I would be reading the same books and then debate them after. I came up with the idea that we should all start a blog where we can keep track of what we were reading and air our debates on a more organized platform. By the time I started the blog, however, it really became my own pet project and has grown beyond anything I ever expected.

AMJ: I love the way you set up your reviews with the book summary and your overall opinion, followed by the in-depth analysis. Your SOIAF analyses have made me appreciate the books more, because I’d grown very enamored of the show and felt it often streamlined the narrative in a really effective and satisfying way. However, your deep dives have reminded me of all the deep backstory and intrigue that is (by necessity) lacking in the show.

SL: I really am rather obsessed the quantity of detail that Martin has put into the SOIAF series. Last year my blogging goal was to reread the series to be able to put together those in depth analyses. The reread made me appreciate the series so much more as I was shocked at all the little details I’d overlooked the first time around. But I think the show has done a wonderful job adapting the series in a way that works for TV. While I occasionally miss a character or storyline they cut out, many times I can appreciate why they made that choice. Do you have a favorite (spoiler) fan theory?

AMJ: Well, my favorite theory–that Tyrion is also a Targaryen and would be the third dragon rider–was knocked to shreds in the penultimate episode of the show. Of course, that doesn’t mean it will play out that way in the books since we have an alleged legit descendant of Rhaegar on the field. And oh, I’m not completely buying this annulment business. I am fully on board with Rhaegar and Lyanna being in a loving, consensual relationship, but I doubt the Dornish princess would have simply shrugged her shoulders and accepted an annulment.

SL: Our favorite theories are at odds then! I was absolutely convinced that Jamie and Cersei were the Mad King’s children. There were so many hints throughout the text that I got more and more excited about my theory, especially when it was stated that Tywin would never forgive the King due to what happened on his wedding night. That is, until I looked at the family trees in the back of SOIAF and the timeline didn’t match up to my theory. I’m sure there will be a big twist we won’t expect.

AMJ: Oh yes, I’m aware of the J&C theory. I came away with the impression that Tyrion was the Mad King’s bastard because of that same story, which I for some reason I thought had happened later in their marriage, and it would further explain why Tywin hated Tyrion so much. BUT it’s moot now, unless Dany or Jon are killed and somebody else needs to mount the dragon. Can you tell us about meeting another author we’re both fans of: Peter Brett?

SL: I was so excited to see finally meet Peter! He was on tour for the final novel of his Demon Cycle Series, The Core, which took him to my hometown. He was really fun to talk to and so personable. I can’t wait for you to read The Core! It is action packed from cover to cover! During the question and answer session I was surprised at the number of George R. R. Martin based questions he had to field. I wonder if that is a reoccurring theme and if he ever gets tired of them!

AMJ: That’s funny. He must be thinking, “HEY! what about my work!”

SL: That’s exactly what I was thinking! He handled them really well though which made me think it wasn’t the first time he had been asked similar questions.

AMJ: Maybe 4-5 years ago I was in the audience for The Colbert Report, and just before they started taping, Stephen came out and was taking questions from the audience. Everyone knows he’s a huge LOTR fan, but somebody asked him if he’d read Game of Thrones. He had not, and people couldn’t believe it. I think this must have been before the show started on HBO, or perhaps just around the time it started up.

SL: I was introduced to the series before ADWD was released. I had about a month to wait until its release. Meijer (a local grocery store) was the only store in the area open at midnight that would be selling the book. I waited in line at midnight with 20 other guys who were all waiting for a video game release. They were all shocked and couldn’t believe I was there for a book. I told them at the time they should read the series and wonder how many of them remembered it was a Game of Thrones book.

AMJ: It’s been fascinating watching the show and how even when it takes a different path to get somewhere, it always ends up at the same narrative touchpoints. It’ll be fun to see that process play out in reverse.

SL: True. I wonder just how much the books will end up deviating from the TV show.

Be sure to check out Sarah’s ongoing observations about books and the world on the Critiquing Chemist!

Fantastic #shelterislandsunset dining at the Rams Head tonight.
Victory!! And I shot under par. This may be my best round of mini golf ever.
Welcome to Shelter Island!