The past week I’ve been thinking a lot about a headline from Tor.com:

Do Better: Sexual Violence in SFF

In this article, Sarah Gailey bemoans the fact that sexual violence is the default character-building motif authors use when they need their heroines to suffer or overcome a challenge. Why not physical violence, or mental or emotional difficulties, or another form of negative personal experience? She lists several books where the female protagonists do not experience sexual abuse, then asks authors to:

Ask yourself, and do better. 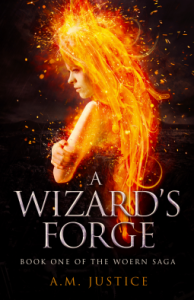 Such admonishment puts me on the defensive, since I’m one of many authors whose female protagonist experiences sexual abuse. In A Wizard’s Forge, sex abuse is the driving force behind Vic’s quest for vengeance.

Except, it’s not. Early in the novel, Vic’s nemesis purchases her from slavers and undertakes a program of psychological abuse to gain control over her. Sexual abuse is one tactic in his strategy, but he also starves her and hangs her by an ankle out of seven-story window. On the flip side of his strategy, he rewards “good behavior” with food and sexual pleasure for her. Perhaps his most effective tactic is to isolate her from any other human contact for three months and make himself the center of her world:

The first weeks in Lornk’s tower, she spent the days copying out all she remembered of the Logs onto the table, her fingertips writing an invisible record across the wood. But summer’s heat soaked through the walls, shimmering from the table, the mattress, the glass in the windows. Over time, her thoughts smoldered away, leaving lethargy like ash. She lay on the bed, gasping at the whispers of air sifting through the slats above the windows, waiting for him.

Sometimes as he approached her, his hands, his head, his arms and legs would grow to a gigantic size, and as time passed, she felt herself grow smaller, to the size of a doll who sleeps until the child plays with it and gives it life. The light through her windows dimmed whenever his key turned in the lock, the door opening like the world turning toward the rising sun.

At one point, Lornk and Vic discuss his strategic goals:

Her head shrank into her shoulders, while his eyes grew larger, bluer as he watched. “You want me to have nothing but you,” she said, her voice clearer than she would have thought.

He laughed softly, stretching his arms out, then twining his fingers behind his neck. “I told you once—I want you to crave me. Why do you think that is?”

“Oh, I’ve had your obedience for months. What I want now is your devotion. The day may come when you will have the world in your hands, and I want you to hand it to me, without reservation.”

Lornk doesn’t want Vic as merely his sex slave. He wants her as his, wholly and completely. Not because it suits his ego to have a young woman fawn over him, but because he knows something about Vic’s destiny, and he wants her to pursue it in a way that will benefit him.

I’m certainly not the first author to explore punishment and reward as a means of mind control. In the Taming of the Shrew, Petruchio gains Kate’s submission by killing her with kindness. In television’s Homeland, alternating imprisonment, torture, and mercy lead patriot soldier Nicholas Brody to turn terrorist and don a suicide vest with the aim of killing American political leaders. There are plenty of real-life examples too, from Patty Hearst to Hedda Nussbaum to the bank hostages who gave the Stockholm Syndrome its name.

Vic escapes Lornk’s clutches, fleeing not her life as a sex slave, but as a devoted slave.

Panting, heart beating wildly, she felt loathing churn in her belly, not for him, but for the clockwork doll he’d make of her. The bookcase swung back; she clenched her fists and ran down the passageway. Oblivion, Earnk had said. A protest gibbered in her stomach, but she clamped her jaw shut and moved forward. Oblivion was better than life as his toy.

She finds safety among Lornk’s enemies, yet she fails to shake off his grip. Even years later (most of the novel occurs five years after Vic’s captivity), when she’s fighting Lornk’s troops on the battlefield and has vowed to kill him if she gets the chance, she still feels the urge to submit to him, and her shame over desires she cannot suppress cripples her, making her unable to move forward with her life.

The sensations and desires she had known in a white room at the top of a tower had begun to slip out, an insidious corruption of the blood that pulled her thoughts away from death toward—toward what? Why did life frighten her more than a battlefield packed with enemies? Why did she shrink from love to embrace hate? Ashel, beautiful and kind and perfect, had professed his love for her, a broken, used, pitiful creature whose desire for another man infected her like a parasite. Ashel knew that and had offered to wed her anyway. Wouldn’t life with him be a better way to purge that infection than more bloodletting?

“I don’t know.” Angrily, she wiped her cheeks dry. Shrine, she was the Blade, and she was gibbering in terror at simply going up a flight of stairs and talking to a man.

This was a deliberate choice I made as an author, to show how Lornk’s fingers have dug deep into Vic’s psyche. Some of AWF’s Goodreads reviewers haven’t bought this premise, or they simply don’t like heroines with this sort of weakness. Yet although I choose fantasy as my medium, I’m interested in telling stories with real emotions. Harboring mixed feelings for an abuser happens all the time in real life—think how many abused women stay with their abusers and refuse to press charges when police are called. As one woman recently wrote of her own experiences with domestic abuse,

From the outside, terror and control looked a lot like love.

I suppose many readers like heroines who stand strong and do the right thing, no matter what they’re up against. They want Katniss Everdeen. I gave them Lisbeth Salander.

Because of Lornk’s influence, Vic does not always do the right thing, and she doesn’t always stand strong either. In fact, her vulnerabilities play out in ways that lead to tremendous harm. But Vic’s story isn’t over, either. There will indeed come a time where she’ll hold the world in her hands, and I guarantee what she does with it will be her choice.

5 thoughts on “Legacy of Sex Abuse and Terror”

Says it all. #vote2022
Stole from a friend. But it’s awesome, and it makes me happy, so I’m a 6 right now.
Currently at a sporting event.